My new story, Cigarettes and Coffee, has just been published in the January/February 2023 issue of Asimov’s Science Fiction. 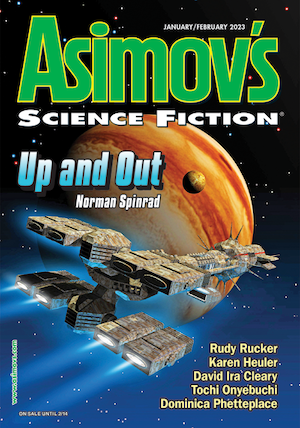 … and it’s such a thrill: I’ve dreamt of being in Asimov’s for literally decades.

The story is set in the small town of Amos, in West Texas, around thirty years from now. America is in the early stages of becoming a full surveillance state, but the tendrils of the Department of Observation haven’t quite reached Amos.

That’s beginning to change. In this excerpt, a new police robot has arrived in town, and the sheriff is bringing it to the station for the first time.

Miller’s rummaging through his desk drawers when I come in with the new Gerald.

He doesn’t look up. “We got any spare phones, Sheriff?”

I hang my hat on its hook and point at an empty desk. “That’s yours.”

“What’s mine?” Miller says, and looks up. Freezes.

“Thank you,” says the bot. It moves to the desk, pulls out the chair, sits. Our Gerald — the one we’ve had for the last decade — would have just gone still until it was told to do something, but not this one. It studies the office, sliding its head left and right, up and down.

It looks real. It’s got skin and a face and short brown hair, parted to the side. It blinks. It’s got fingers, and the fingers have nails. It moves fluidly, like a dancer.

Still: there’s something off about it. You can tell.

Miller can definitely tell. “What the fuck is that?” he says.

“I have not yet been assigned a name,” it says.

“You’re New Gerald,” I say. I sit down at my desk and switch on the computer. The monitor blats awake then sizzles quietly while the drive grinds through the boot sequence. I lean back in my chair, look at Miller. “Where’s the other one?”

“I’ve been temporarily assigned here to assist with your investigation into Observation equipment sabotage,” it says.

That’s new too. Our Gerald doesn’t say anything unless you say something to it first. Miller stares at it. We sit there, not saying anything, until the computer finishes waking up.

I squint at the litter of icons on my desktop until I find the one I’m looking for, double-click it. The drive churns for a while. It’s the old kind, read heads skittering over stacks of spinning platters. They don’t sell these things anymore, but Bel always seems to find another one when mine gives out. Probably gets them over the border, at the Bazaar in Ojinaga.

I asked her once if she could build me something faster. That set off one of her more spectacular rants. The newest solid state drives won’t work with my ancient motherboard, she said, so she’d have to find an old one that does — unlikely, given the failure profile of early SSDs — or get me a brand new motherboard. A new motherboard means new cards for all my ancient peripherals, unless she could find one with PCI slots, which is even less likely than finding a workable SSD. And no matter what she’d have to scrub everything for surveillance trapdoors, plus re-spoof the fingerprints Panop expects all its hardware to transmit back to the mothership. She paused there and looked at me, set jaw and stiletto eyes. So maybe you could just wait a couple extra seconds for fucking Solitaire to start up? Think you could manage that, Jake?

I only asked once.